Posted February 17, 2018 by Laurie under Feelings, Poverty, The Basics

In a way I feel like a pretentious, privleged fool for doing this. In another way, I feel like I have to.

It’s recommended, in general, for single, independent missionaries to live on $1,500 as a minimum monthly salary. That would be $50 per day!!! Last year, I spent an average of $1,119/ month. That’s 37$ a day. Granted, a lot of that went to rent, insurance and other things that I felt were IMPORTANT. But I felt and even FEEL guilty about it. Especially because my income (from donations and web work for a cause) was only half that, and the rest just drained my savings almost to the bottom. For this year, my yearly fundraising goal is $8,500, which would be $708/month. I don’t think that will be super comfortable but I’m sacrificing. Anyways, back to the story. 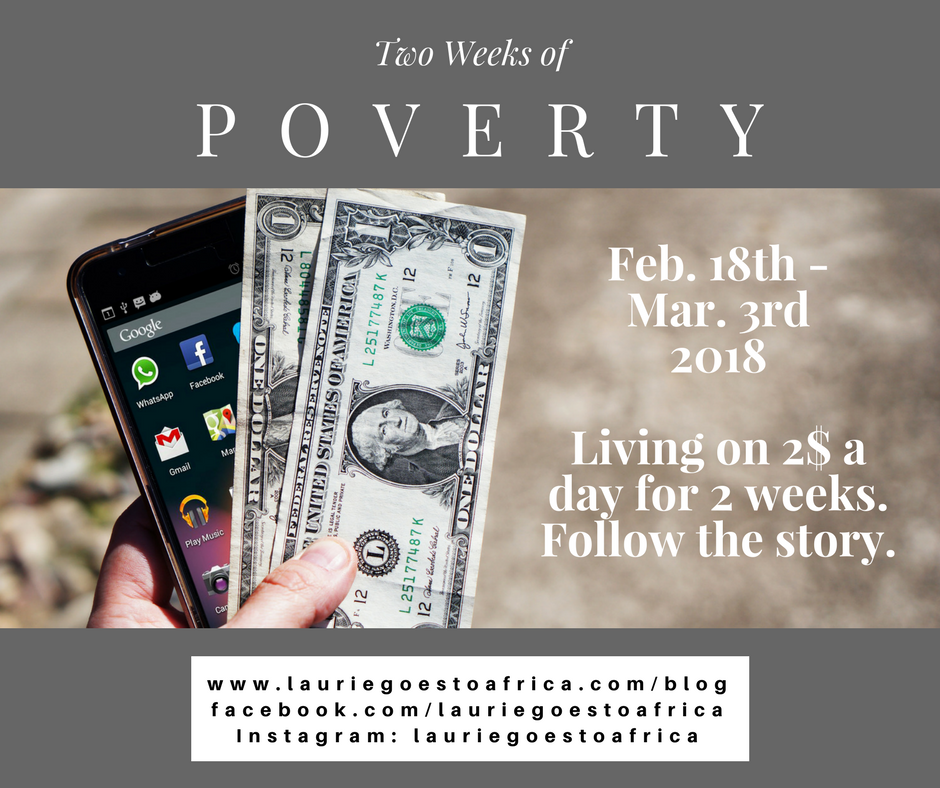 2$/day. This is about $60 per month, which I know several Kenyans that do make that or even wish they made that. It’s not that Kenya is so cheap. If I travel from my home to downtown and back, that would be about 80 Kenyan shillings. (The exchange rate I use for ease, and is quite close is 100 Kenya Shillings or KES equals $1 US Dollar or USD.) And really that distance is walk-able, but it could take a total of an hour for the round trip.

One of the women that I’m helping makes about 30$ a month and that’s in a good month. She has 3 kids in school. She lives in a one room tin apartment that only has electricity after 7 pm with her youngest son. It has a shared outhouse for toilet and another for bathing. Another child is at boarding high school and another lives with a relative. That rent is $15 a month.

Another woman that I help is even worse off. Although she has no kids at home, she has one that she is trying to put through boarding high school (boarding school for high school is extremely common in Kenya). This woman lives in a single, mud room apartment, also with a shared outdoor toilet and shower. No electricity at all. She uses candles at night (although she doesn’t stay up too much at night, because, what is there to do anyways?) and charges her phone at friends’ homes. That house is $10/month, which her adult sons tried to cover (but I’m not sure they are able to cover it every month). This woman used to work a job Monday – Friday, 8 am to 7 pm where she cleaned the house and took care of a toddler age child. 30$ a month for that!!!!! That is truly slave wages, but unfortunately it’s common. When people accept that pay, then people will pay them that pay. The woman, 60 years old, had to walk the distance to work, which might have been about 40 minutes each way, because the fare would have costed her 1$ a day. Almost all of her pay!!! She left that job because the woman that she was working for started mistreating her even more. CAN YOU IMAGINE!!??!!

In both these cases, if anyone gets sick, what can they do? Although doctors and medicine is much cheaper in Kenya than in the US, if they don’t have the money they can’t do much! The second woman I described had a terrible mouth pain and I guess two teeth needed to be removed. But she couldn’t afford it, it was going to be about 17$ to remove them. Her sons couldn’t help (I have not met them, so I try not to speculate on them but apparently they struggle with money also,) and she just doesn’t even have enough to feed herself let alone 17$ at a given time for an emergency like this. I gave her 20$ to get her teeth taken care of and it was a miracle to her. Imagine, what are you spending 20$ on?

This is a photo from Save the Children in Kibera, the largest slum in Nairobi. I have seen many scenes like this. Imagine your children playing in an area like this. The fact that the children are here, to me doesn’t show poverty. The fact that they don’t have any safer place to play is the real illustration of poverty.

These are not unique stories. Extreme poverty is defined at living on less than $1.25 a day, but that was determined in 2008 on 2005 prices. In my head, based on my surroundings and observations, I like to say $2.00 a day. (The UK pushed the line to $1.90 in 2011.) Learn about the numbers and specifics on extreme poverty definitions here. That wikipedia article says: “Using the World Bank definition of $1.25/day, as of September 2013, roughly 1.3 billion people remain in extreme poverty (or roughly 1 in 6 people) (of ~7.1 billion people in same time frame).”

There is an amazing documentary by some great and YOUNG American boys called Living On One Dollar. These guys, in their early 20s, go to South America and attempt to live on 1$ a day to learn about poverty. It’s amazing and inspiring, and yes, they gave me the idea to do this project. But they don’t cheat. They do it for real. And it’s EYE OPENING. And over a billion people live like this! That movie is available on Netflix right now! Watch it on Netflix if you’re a Netflix subscriber.

Anyways, here I go. In my nice safe house, no kids to take care of, with health insurance and internet. But still. My lifestyle is certainly going to be come much more strict.

Follow me here on my blog, through my newsletter, on Facebook and on Instagram as lauriegoestoafrica. I’ll be posting about how things go and what I learn.

Read Part 2 of this story here.