Posted March 6, 2018 by Laurie under Feelings, Poverty, The Basics

Well. I finished my 14 days of poverty: living on 2$ a day. I originally thought I would/could blog during that time, but it just didn’t work out. But here I am. And here’s the update. (When I say 1$, I’m also saying 100 Kenyan Shillings, usually that’s pretty close to the exchange rate.) Read the intro to this experiment here.

Two Dollars a Day for 2 Weeks

Things I learned about while living on 2 dollars a day:

There were things that I would really have liked to do during this period, but I just couldn’t afford it. Even if I wouldn’t spend any money at this place I wanted to go to, I couldn’t even afford the 1-2$ transport to get there and back. 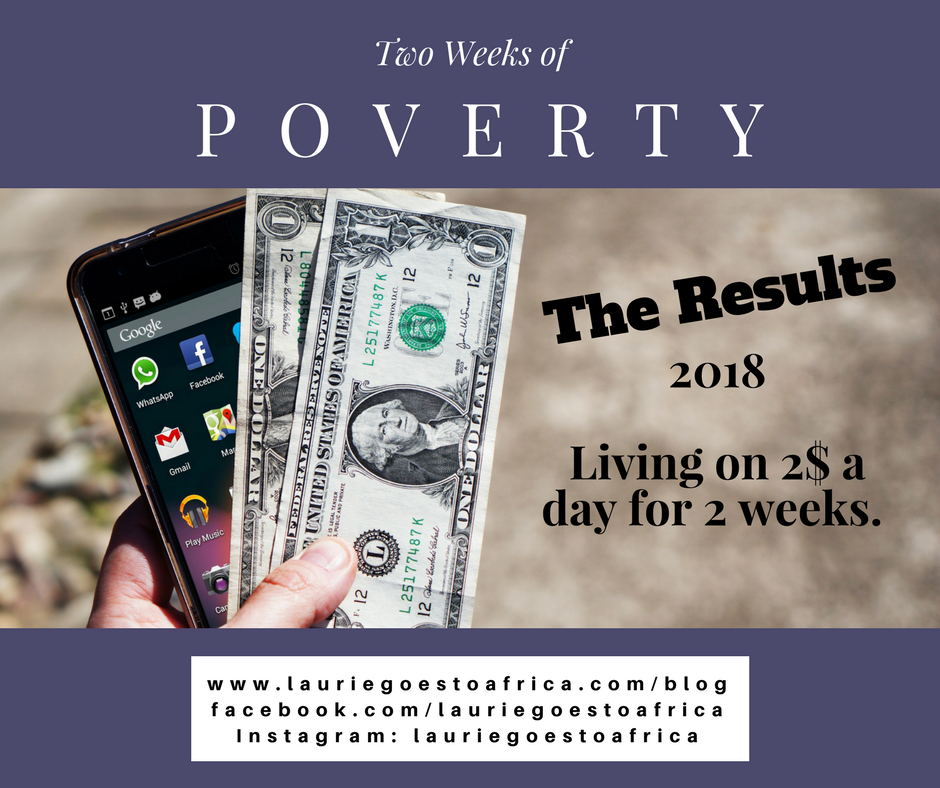 The best vegetables are in town at the market. In my neighborhood they sell all the common stuff, but in town is more of the stuff I want like cucumbers, carrots, beets, fresh cilantro (corriander). But it would cost me about 1$ to go there and back. And then, how much do I decide to spend once I’m at the market? Cucumbers are 50 cents each. I can easily eat 2-3 cucumbers a day (after I put 2 slices on my eyes). I could walk to the market, getting there might take 20 minutes, but walking back with a heavy load would not be fun. And sometimes I’m just not in the mood for all the “mzunugu attention” and the noisy crowds and traffic I would have to navigate through.

On Day 4 I ran out of electricity. We have a little meter that we add credit to with our phone. It’s efficient for the most part. Well I ran out, so I added 2$ (200 Kenya Shillings). I wasn’t sure how long it would last. It ended up lasting till Day 8. It ended when I was in the shower at night, so the hot water kicked off and I was in utter darkness. The power goes out enough due to circumstances outside of my control, that this is not the first time this has happened. So Day 8 I added 5$. I figured that would last me the rest of my experiment. I’ve been trying to use less lights which I HATE because I feel uncomfortable in dark settings. I’m conscious of “ok, this room has the energy saver bulbs, but the kitchen doesn’t so I need to make sure to always turn off the kitchen light.” The neighborhood power has been out a lot lately. Everyday, at least once for over a week. It’s out right now as I type this. I was low on candles. I kept forgetting to get them when I was in town. But also, candles aren’t so cheap here.

I started making a grocery list around Day 10 and treating it like it was a magical list of all the things I wanted in life. Peanut butter, yogurt, sparkling water, mustard, jam, mayo, chicken, minced (ground) beef. Even though, at this point, I’ve bought most of the stuff on the list, it some how seems like a magical list. These beautiful items, mostly foods, that keep my body healthy and keep me comfortable and happy. And yet many of my friends and neighbors can’t spend their money on a lot of this stuff.

When you’re living on 2$ a day or less, food is for survival, it’s not for comfort. But I’m used to food being comforting, tasty, interesting and hopefully nutritious. Although I know that people could cook more nutriously than I had been during this period, I was kind of eating crap. I felt kind of frozen, didn’t know what to buy, didn’t know what was worth my money. So I was eating rice and lentils. Bread. I could add kale (skuma) for 10 cents or an avocado for for 20 cents. But I usually didn’t plan appropriately and when it comes time to eat, it’s raining and I can’t go buy these things.

It’s pretty much impossible to be charitable on this budget. I did do some charitable spending that I felt obligated to do (as a person who’s here to help the less fortunate), but I didn’t include it in my “2$ a day”.

It seems like it should be human right to have enough money for food, shelter, education. But for some reason it’s not. One of the big reasons I’m here, is I don’t want people to have to live in utter poverty like that. I want to help some of these people climb out of this trap.

My due date was up for my health insurance and property insurance during this period. Those are things that I want and feel are important. Virtually no one living on 2$ a day would have any insurances.

I’m lucky I didn’t run out of cooking gas. Our gas is in stand alone tanks and it costs about $20 to fill. That would be 10 days worth of my money! But the tanks do last 6 months (for me), so that’s very nice. That’s 11 cents a day. Many people around here use firewood, charcoal or paraffin to cook. Gas is cleaner and it’s very nice to not worry about replacing it very often. But you even have to put a deposit down for the tank when you first get it. My deposit was 65$ for the tank. So for some living on 2$ a day, gas is pretty much impossibly out of reach.

I cheated one day. On Day 8 I was terribly down, emotionally. I got wrapped up in heart ache and the only cure I could think of was: wine, cookies and ice cream. Looking back, there are much better, healthier cures that wouldn’t have cost money!! But, when you’re feeling like that, it’s hard to remember that. The image of wine, cookies and ice cream to solve my problems would not leave my head. Those 3 items were about $9.50. I didn’t include them in my 2$/day calculations. But you can see that someone living on 2$ a day wouldn’t be able to have that kind of cheat day! 🙁

What’s interesting, is, some people have wine, cookies and ice cream every day. Or several times a week. It’s not a big deal. All of those things are comforting, and in America, it’s almost expected that people comfort themselves with food. But on a 2$ a day budget, it’s a waste of money. I ended up spending almost 10$ on those three things that day, including the motorcycle fare to get me back and forth. 10$! That’s 5 days worth of my budget!

I didn’t have any meat at all during the 2 weeks. I was missing it. Not just emotionally but it seemed like my body wanted it.

This experience did make me want to be more generous. When I can give money, especially to the poor people who I know are good people and who are trying and just struggle, I want to. Now I know a little bit more how it feels. It’s not easy. It’s depressing. It feels like you’re in a trap. You aren’t free. I don’t just want to help these people with food or money: I want to help pull them out of this trap, so that they are free and can buy some cookies or ice cream once in awhile and not worry about getting sick. I’m happy for this experience. Even if it was tough. It’s the tough experiences that make us stronger.

14 days x 2$ is 28$. I ended up spending $28.22 in what I considered “living costs”. Want to know how much I actually spent? $964.20. In two weeks. No, that’s not normal for my spending for 2 weeks. I had to pay my yearly property insurance and and my bi-annual health insurance. And a one time fee for a fundraising class for missionaries. And my rent, which is $120.00 a month. It’s expensive to be safe and healthy. We think of them as human rights but much of the population can’t afford the luxury to ensure health and safety.

It seems like it should be human right to have enough money for food, shelter, education. But for some reason it’s not. One of the big reasons I’m here, is I don’t want people to have to live in utter poverty like that. I want to help some of these people climb out of this trap.

Laurie, your blogs are so interesting! I cannot imagine doing what you are doing. It takes someone very special, and I am proud and in awe of you! I will try to help you out a little, very soon…..keep up the good work, and God Bless You !! Betty

Thanks so much Betty! That’s so nice. 🙂 I’ll be coming home to Nebraska this summer and I hope to be able to see you! God bless you and your family too!