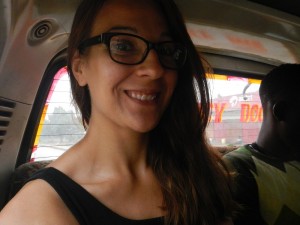 Me in the matatu, headed to Kampala. The boy next to me was taking selfies earlier, which gave me the confidence to take some. 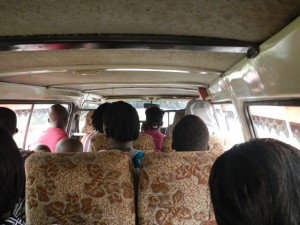 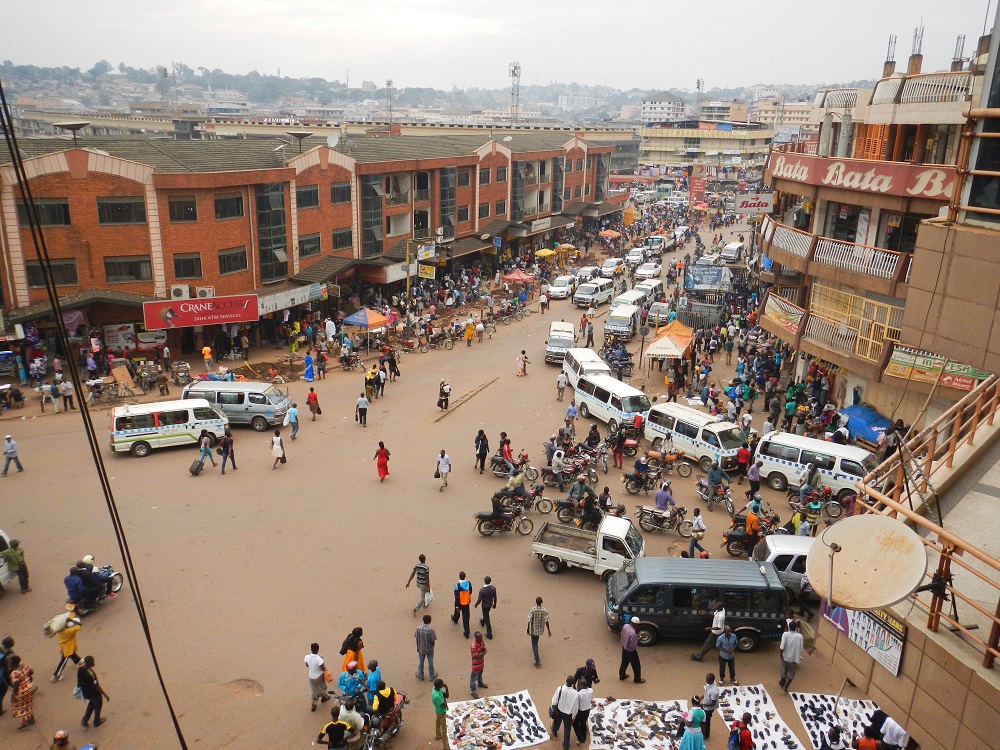 Busy intersection near my hotel. 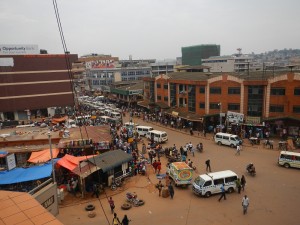 Same busy intersection, slightly different angle. This was on a Sunday afternoon. Imagine it on a busy Saturday afternoon, like when I arrived!

Last weekend I went to the capital of Uganda, Kampala. I went by myself, taking a 14 passenger minibus (called a matatu) on a 4 hour ride with my backpacking bag.

I made reservations with a hotel called the Pacific Hotel, which was in downtown Kampala. It was 18$ per night! My travel book acted like this would be a good place but I couldn’t really find any reviews online. I had a list of other hotels so I figured if this was bad I could go to another.

The ride up wasn’t bad. There was a chicken in the matatu, but she was quiet. 4 hours isn’t too bad when you don’t look at the time. I made conscious decisions during the ride to avoid looking at the time because I thought it would make me more “3 more hours. 2 more hours. 1 more hour. Etc.” My seat cushion did seem to sink down quite a bit by the time we got there.

The boy next to me seemed to be the best English speaker on the matatu, which meant that he only understood half of what I said.

The matatu “station”, also known as the taxi park, is insane. The whole area is VERY busy and crazy and I have to admit I was on edge a bit.

I survived!!! I got to my hotel and walked in, although it was crazy outside, it was peaceful and nice inside. My room was to be on the “first floor”. I first was like “can it be on a higher floor?” I had forgotten that in many parts of the world, first floor, means, the first floor that is not on the main part of the ground. But my first floor, was actually on the second floor, or even third floor if you’re an American. I guess this is called the first floor because it is the first floor that ha guest rooms. The other floors were offices, bar and restaurant. 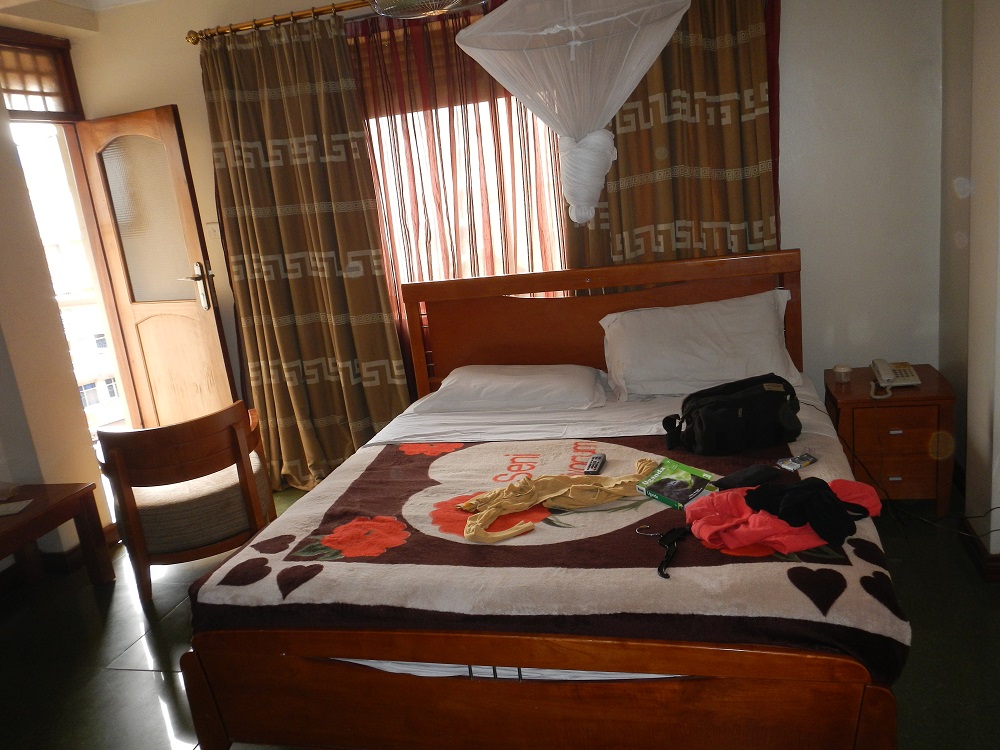 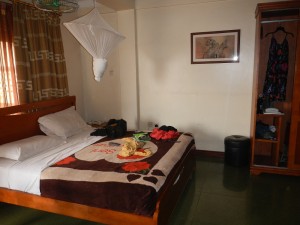 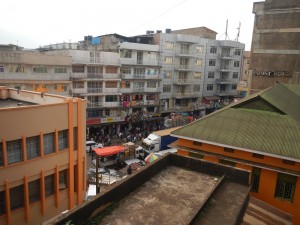 View out from my balcony. 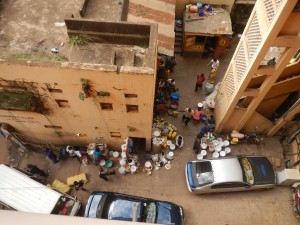 The view below my balcony.

My room was quite nice! I even had thoughts like “this is the nicest room I’ve ever had!” (that I paid for myself). I’m not sure how true that is. I had a balcony. I got room service breakfast (which wasn’t all that good). I had a tv that started out with 4 or so channels, but as time went on they dwindled down to 2 channels. One with soccer (football) and one with African movies, sometimes in English, sometimes not. Oh well.

The area I was in was quite lively and busy.

I really wanted to see Star Wars, since it came out since I’ve been in Africa and I haven’t even seen a movie theater. I heard there was a nice theater at Garden City Mall, called Cineplex. I looked up Cineplex on facebook at Star Wars was at 7:20 pm. Perfect! It was about 2 pm. I charged my phone and basked in my new exciting African city adventure. My plan was to leave the room around 4:30 to walk to the mall, do some shopping, eat dinner and see the movie. While my phone charged I looked at my travel book and drew a map on a piece of paper so I would know exactly where to walk.

I didn’t take too many pictures because I didn’t want to draw attention in more than I already do from just being white. I really enjoyed the walk. It wasn’t crazy the whole time. Started out crazy busy by my hotel, then went to a medium craziness by the city hall or equivalent and then died to a very calm, peaceful, here birds chirping but still see people here and here on a beautiful boulevard, called Nile Ave. The whole walk was about 1 mile. I wore my pretty new peacock dress that I found in our small town of Kalisizo. 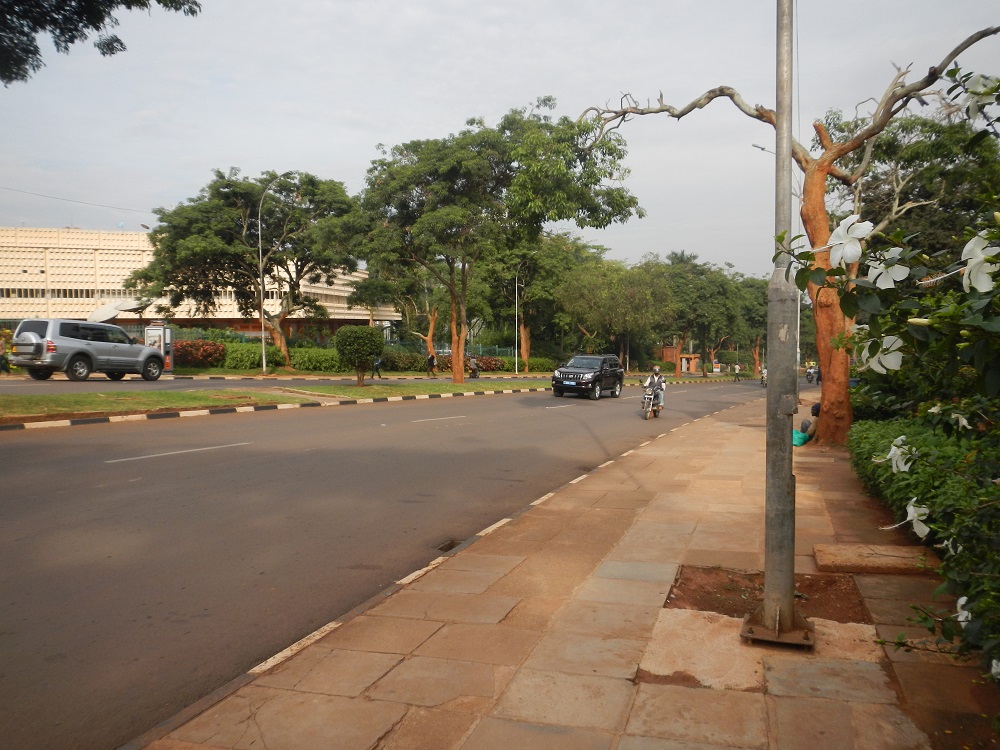 Nice walk on Nile Ave, Kampala to the mall.

I get to the mall and it was pretty nice. Maybe 4 floors of various shops including a really good shop of African crafts and gifts called “Banana Boat” which seems to be a very professional African craft selling business. I bought a bunch of stuff, some for me some for people back home.

I found an AMAZING Indian restaurant that I wish to visit over and over and over again!!! It was on the roof of the mall and the smell and interesting look is what drew me to it. I decided to go there based on the smell and didn’t even know it was Indian until I sat down and saw the menu. I had what I think was the BEST wine of my life. A dry white wine for 9,000 Uganda Shillings, or about 2.80$. My whole meal, Chicken Biryani with two glasses of wine, was only about 11$. Yes please. 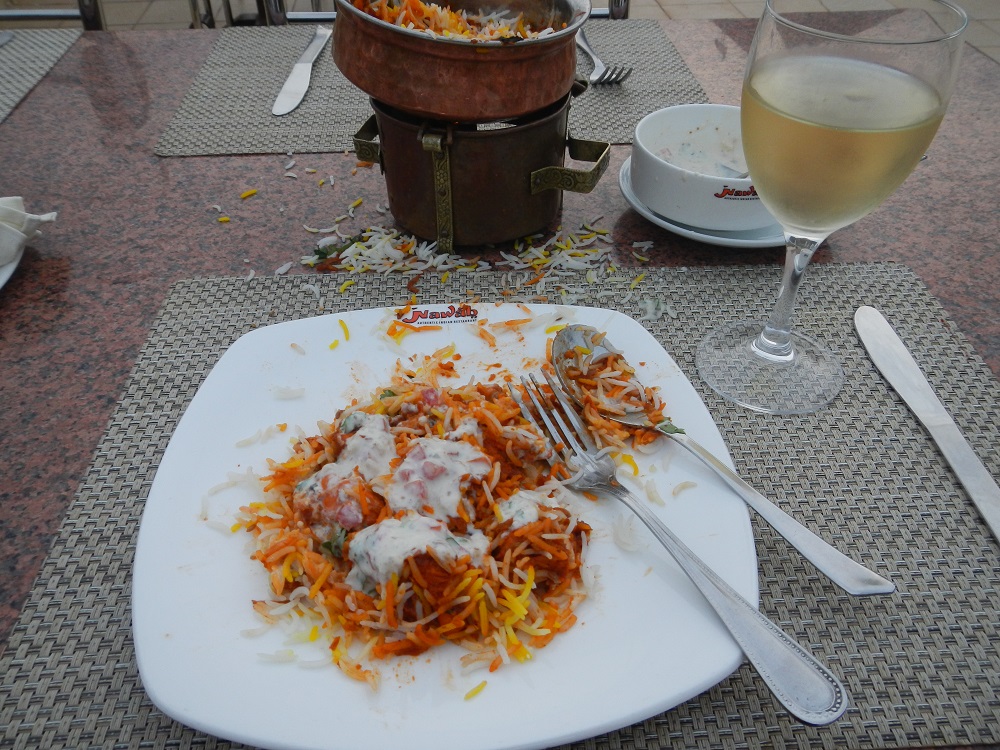 So I have this amazing meal. I finish around 7:05, thinking I have 15 minutes. I ask the waiter “Where is the movie theater?” And he says “It closed”. Crap!!! But then why was it on facebook? I was told, and knew, that there is another theater about 5 min drive away, but that has a different name, so why did this movie theater, Cineplex, post on facebook that the show was at 7:20?! Well, after getting a little panicky, I found that there was a Cineplex at Oasis Mall. Great, where is Oasis Mall?! My phone was on the verge of death but I looked it up, thinking I’d have to get a taxi. Praise the Lord, it was literally next door to Garden City Mall! So I walked there, and got into the movie just a few minutes late. The theater was totally normal and modern, by the way. Although I didn’t see popcorn or soda for sale and no cup holders, but that’s probably all a good thing.

The next day, Sunday, I explored a little bit different part of the city, still on foot, aiming towards a coffee shop and craft shops that I saw in my travel book. I intended to exchange some money on the way there at the many forex/money exchange places a long the way. Yes, I forgot. I get to the coffee shop (1,000 Cups), which was full of muzungus (white people). Great coffee, nice environment, very pricey, I thought (7,000 shillings). I spent every last dime, literally, every bill and coin I had to pay for that coffee. But that I was my own fault. By the way, the muzungus in Kampala, not as friendly as in Kalisizo! They’re about as friendly as they are in New England. As in, you’re lucky if they’ll even glance and smile at you. 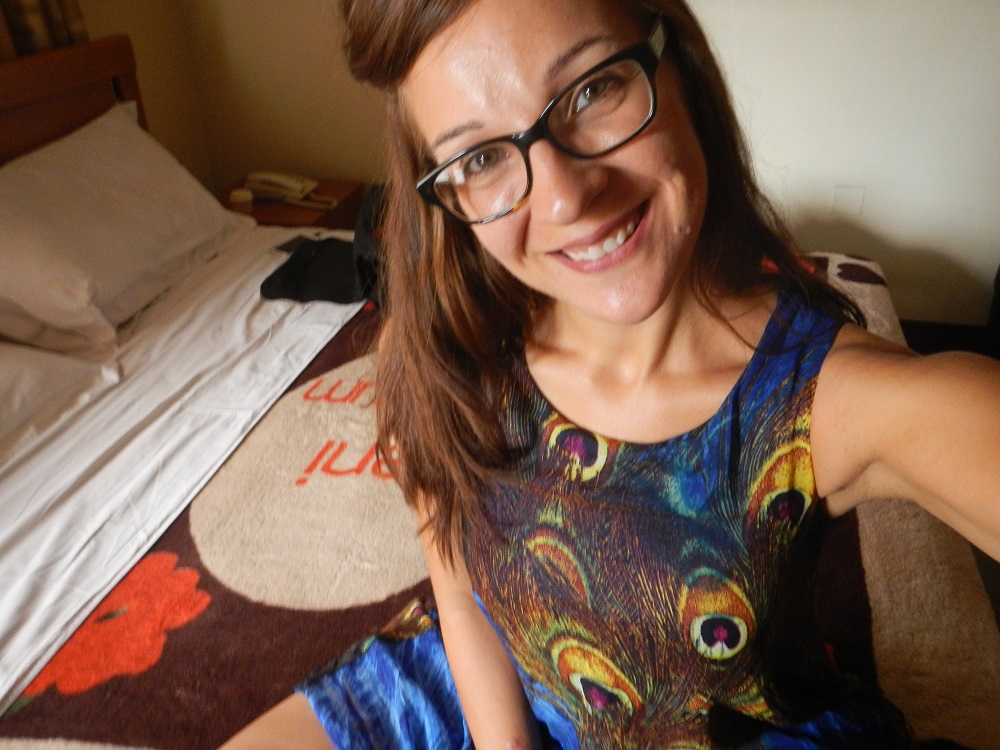 Me in my new peacock dress in my hotel room. Yay! 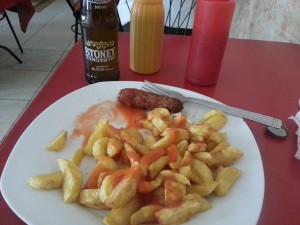 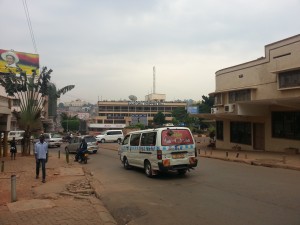 A matatu in Kampala. 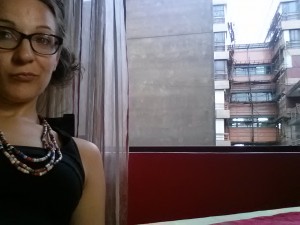 Waiting for my dinner at the hotel. Chicken curry. I thought it would be Indian style. It wasn’t. Tasted like “Hamburger Helper”.

I met a very nice lady name Sylvia who led me to the nearest and best forex and I exchanged some money. It was about 4 blocks back in the direction I had already come from. When we walked back I went to the “craft shops” across the street from the coffee shop. Wow. Small shop, after small shop, after small shop, full of crafts. I’d say literally maybe 30 shops. I couldn’t look at them all. I had to leave when my messenger bag was completely stuffed and I also felt uneasy about the fact that a) I was spending money without careful calculation, b) I was gaining “weight” to my burden of possessions that I’m going to have to to haul around Africa and c) I was just overwhelmed by all the shops, the arts and crafts that I would just LOVE to have and all the people saying “come inside, come inside”. There was so much cool African jewelry and art and I was thinking “Oh I would love to have this in my apartment. And it’s so much cheaper than I could get it in the states, if I could even get it.” But the thing is, MY APARTMENT DOESN’T EXIST ANYMORE. I might not have an apartment in the states ever again! I might get all this crap and haul it back to the states, only to come back here and leave it all in boxes in the states! So… yeah. Who knows.

Speaking of never having an apartment in the states again…. I REALLY love it here. I can really see myself setting up shop here. And yes, I will decorate it with African art. Once I get my new home, I’ll go to Kampala, eat at the good Indian restaurant, drink the amazing wine and get a whole bunch of African art and decorate it.

That’s so cool!! Every little thing you do over there is like an adventure. Even just going to the movies(The Force Awakens was worth it! Good movie!) I can really hear the love for Africa in all of your blogs. You were meant to stay there Laurie!!

Laurie….you are my hero. I love reading your blogs and hearing of all the adventures! You are an amazing woman to do this on your own! I will keep reading all about all the fun you are having!! If you are scratching your head, wondering who the heck I am, I am your gramma Delores’ sister….,.,love you!

Aaaaahhh! Thanks Betty! I wasn’t scratching my head, I definitely know who you are! 🙂 So glad you are liking my stories and what I’m doing.