A big thing I’ve been doing in Kisii is tutoring these sweet kids at the children’s home. I’m not just catching them up on things they’re calling behind in, but I’m teaching them the love of learning and teaching… and showing them love and attention.

The Fate of a Child Who Falls Behind 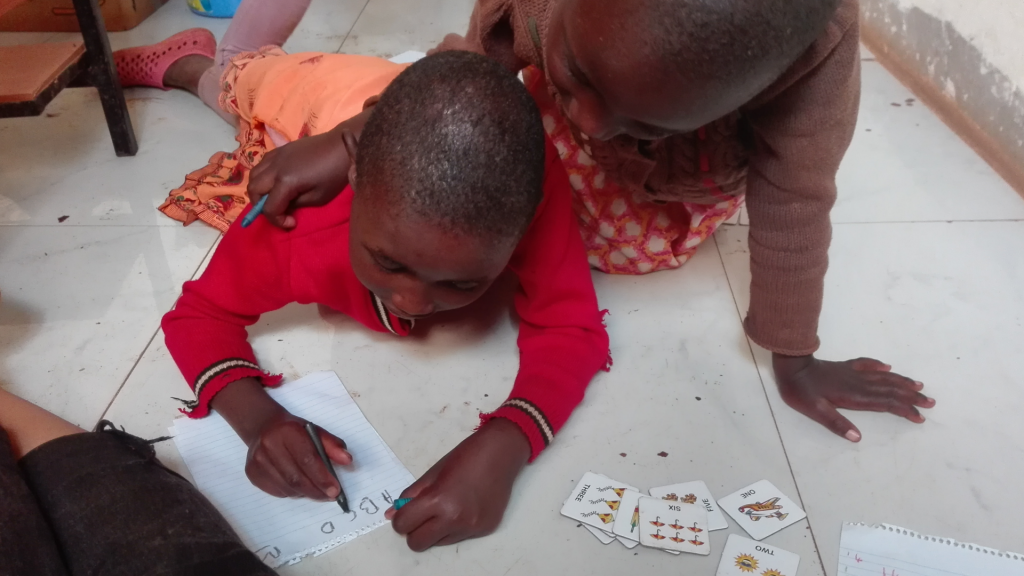 Maybe you remember the 20 year old boy who was in 8th grade, who I was working with last year? He didn’t even fully know his ABCs, and he definitely couldn’t read. The school told me he was slow, but I had this burning question, “Is his brain actually slow, or is this the result of being TOLD HE WAS STUPID, and no one taking the time to do one on one work with him INITIALLY.” I worked with him all of last year, and sadly little improvement was seen. I hated to stop working with him, but I kept thinking about the kids at the children’s home who are learning their ABCs. What about them? Will some of them fall behind in pre-school and end up like this guy? It inspired me to start working with the children’s home kids.

The kids never get any one on one time educationally (or otherwise), so if they fall behind, they’re screwed. Kids at the children’s home are failing pre-school and kindergarten, and not in small percentages. One girl who I think is bright (but she seems to have embarrassment when she doesn’t know something and a tendency to give up when she’s embarrassed,) has been failed 2 years in a row. I’m sad to find kids who are 7 years old and don’t know any colors and can’t count correctly. There could be a number of reasons for that. It could be that before they came to the home they weren’t in school. But I don’t understand how some of the kids could have been at the home and in school for 2 years or more and they still can’t count.

I’m working to fix that.

In 2017 I had been helping the kids with colors, letters, numbers and reading in an informal way. Now I’m actually taking the kids, one at a time, to a separate room so we can actually work on learning what the individual kid needs to learn. I’ve found that groups of 1-3 are most effective, depending on the kids’ energy and concentration ability. So far this year I’ve tutored 29 of the kids, up to 17 times each, focusing on the kids who are struggling (but it’s also hard to turn away the kids who love learning!). I’ve even been testing some of the kids for color-blindness.

As I work with the kids, I realize some kids are super bright and some kids are slower. Some kids maybe are average, but no one has spent the one on one time with them that they desperately need. I’ve mostly been working with the kids who are actually schooled on the children’s home campus, which is 2 levels of preschool and kindergarten. I’m giving them the close attention they need to succeed even at these early grades.

Of course I hate that term. But what else can be used? (Please tell me, if you have any ideas!!) Most of the kids at this children’s home aren’t really orphans. Most of the kids have been abandoned, or lost, or just dropped off at the children’s home. Why? Well, in the cases of abandoned infants, it’s cases that might be aborted in other parts of the world. They didn’t want to be pregnant, they can’t handle having a child right now, so the very young infant is left at the side of the road, in a hospital or other random place. It’s often said that poverty is a reason why the women abandon the babies, and I’m sure that’s a part of it. But often it’s not even the woman’s choice – the husband insists she get rid of the child for any number of reasons, or there is no husband. Maybe the mother was raped or wasn’t even an adult herself. Maybe the mom also came from a background of not having a family.

Some kids are “given” to the children’s home as an “option” for free education, food and care. So the kids have families, but that family has very little influence on the child. The kid might go home for school breaks but most of the days the kid is on his or her own with no parent, mentor or adult to love them and guide them through life.

Some children have parents who actually died. Maybe one, maybe both. Ideally, they should stay with other family members. Unfortunately, often the surviving parent finds they can’t manage. And if both parents die, the aunts or uncles don’t necessarily welcome that extra responsibility and expense. Since children’s homes are present, sadly, often people think “Oh, I’ll just take her/him to the children’s home.” That system and behavior is so detrimental to the child, having life long effects. I’m not going to go into that now. I’m supposed to be talking about tutoring!!

Lids!! Old, colorful, plastic lids have been the funnest, coolest and cheapest toys for learning colors. 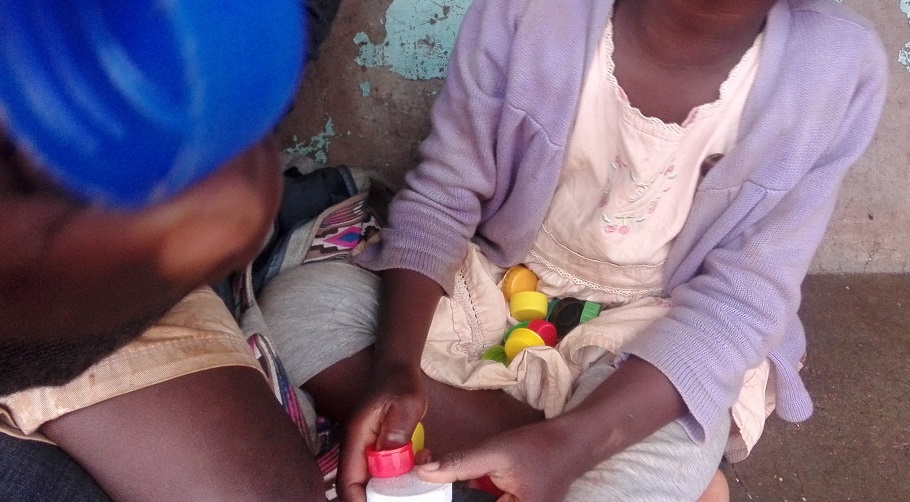 I have flash cards for ABCs and counting and I have some plastic ABCs and Numbers also. They practice organizing or matching the cards and practice writing out the ABCs too.

I try to mix it up a bit, like writing out the ABCs using a green crayon and keep asking them what color they’ve been using. And it’s been easy to mix the colors and counting with the lids.

The Results of the Tutoring

I’m SOOO happy when a kid who knew no colors, now knows 5 or more colors. I’m so happy to see the kids LOVING to learn! And LOVING to teach the other kids! It thrills me to see the kids being more confident with their ABC identification and writing. Many of the students I’m working with are learning and mastering these subjects. It’s not just happening in my sessions, but my sessions help them when they’re in class too. And even outside of school, the kids are helping each other with the learning the colors and counting and ABCs.

I can see these kids changing. Not just academically, but emotionally. They love not just the learning but the attention and praise and encouragement that they most of the time aren’t getting.

My intent is not to just teach these kids colors, numbers, ABCs, etc… but to show them the joy of learning and teaching. I hope this will all have an impact on their education as they grow older and when they have their own kids some day too.

What are your experiences with teaching little ones? Or with struggling students? Any suggestions?