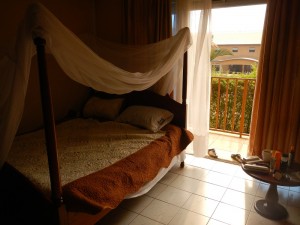 My room. My haven.

I found the safari to be pretty stressful actually. I has happy to get back to the hotel, the Rwenzori Internation Hotel. I was ready for some decompression time, journaling, sitting, laying, watching tv, drinking tea, coffee and wine, etc. I REALLY liked the hotel, for 50,000 shillings, which is about 15$ USD, I had a great room on a great property with really good free breakfast. 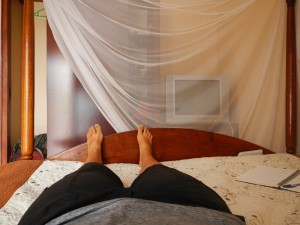 Relaxing. No bed bugs and a whole building all to myself! Heaven!

Sunday was an all day chill fest, which was very nice. I don’t even recall everything I did. I just REALAXED. I remember drinking some delicious coffee, instant with half water, half milk, both boiled, (which is typical for Uganda and me). I got a massage for 20,000 shillings ($5.88 USD), which was nice but probably not 100% sanitary. I tried to (and did) have lots of good alone time, meeting up with Luke for lunch, dinner, a walk, here and there. I thought a lot, journaled a lot and I think I got my head back to thinking about the professional and spiritual aspect of my trip, rather than the “It’s hot” “My feet are dirty” “My hair is a mess” and other cultural annoyances that I had been fixated on for the week leading up to the trip. I’m very happy for the realignment. 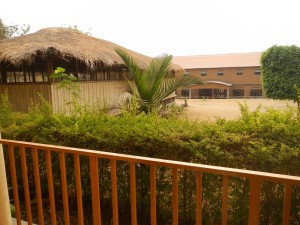 The view from my porch. The building on the left is like a function building I guess and the one on the right is still under construction.

Monday morning I was to take a bus back to Kampala. The bus company was Kalita. Sadly the hotel messed up for the first time with us and none of the kitchen staff showed up in time to make us our free breakfast (despite us telling them the night before when we wanted breakfast.) I was not in a good mood. I really do need some coffee in the AM! And some protein! I say goodbye to Luke and take a boda boda to the bus park. There is a guy making Rolex, a Ugandan breakfast wrap that is very good, at the entry of the park. Turns out they also have a spot to sit down and they also sell coffee. Yay!!! I do love Rolex. I didn’t eat wheat in the US because it gave me acne, but for whatever reason I’m handling wheat pretty well here and my skin is doing pretty good. Rolex has two eggs, kind of omelet style, maybe some tomatoes or onions mixed in and then wrapped in a fried bread called chapati, which is kind of like fried dough, but without sugar. The coffee is actually ground coffee, with water, and the grounds are not filtered out. Hey, you get used to it. I sat there for about 15 min eating and drinking. It was nice and I was able to wrap my head around things and prepare myself for a 6 hour bus ride. The cost for the breakfast was like 2,000 shillings! (like 75 cents USD) 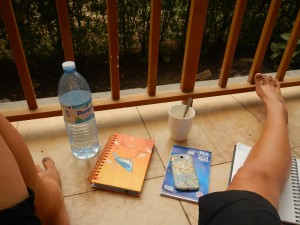 My chill time in Kasese.

My Kalita bus was fine. I survived. My favorite bus snack is gonja, which is grilled bananas. People at the bus stops will sell these and other things through the windows at you. I love the gonja. During all of my bus rides during this trip, I think I had 12. Yes, 12 grilled bananas.

I get to Kampala, at the bus park. I go to the Pacific Hotel. I drop of my bags and repack my messenger bag to go out into the town. I went to the Post Office again to get my travel book which should have arrived. I saw my hot security guard again. He’s not as hot as the cop from Kalisizo but he’s like the younger brother of that cop. Anyways… My book had arrived, I got it and then also learned that the Post Bus to Mbale would leave at 6:30 am. Great. Well, that’s pretty early! But it would be worth it.

I wanted to buy something. I actually needed a new bible because I gave mine away to someone who was interested in one, recently. I found a buy selling them on the street near the post office and I got a cute, small one, fake leather bound with a zipper for 25k shillings. I also went to the coffee shop across from the post office, CafeJavas. It was VERY nice. Actually, when I went in, I think I audibly said “Whoa”. It looked like a cafe I might find in Cambridge or Boston, MA. It was very posh and clean and trendy and big. I got an iced coffee and it was GOOD!!!!! Perfect really.

I felt I needed a new shirt because a lot of my shirts are too sporty or boxy and I just don’t feel like I look the way I want to look. So as I wandered around with my DELICIOUS ice coffee, I window shopped all over the place. I found a women’s used clothing shop that was in the stair well of one of the busy markets. Lots of cute tops that would look great on Laurie! No where to try them on though. And a risk with the used clothing market is that if it has some spots on it, you don’t know if it’s a stain or if it will come out just fine. Well I found a cute black and white striped tank for 18,000 shillings. Score! I noticed after I walked away it had some stains, but I washed it up in the hotel sink with bar soap (because I’m awesome at washing!!) and it cleaned up wonderfully.

My Kampala demeanor has improved a lot from this trip to the previous ones! I have graduated to “No” or “Nedda” and shaking my head back and forth from “No! I don’t want a boda ride! If I wanted one I’d ask for one! Leave me alone!” Part of the problem initially was that the English the Ugandans use, especially those who aren’t used to “whites” can be very rude. For example, guys selling boda rides are like “We go,” “I take you,” “Where are you going?” It took awhile for me to understand that that’s just the words they know, it’s not like they are trying to be jerks. I was also much less stressed out, but probably because I knew where I was going and what I was doing. 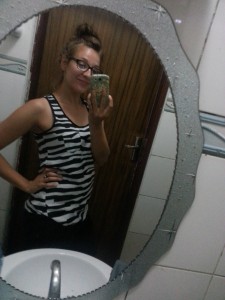 Happy in my new Kampala shirt at the Pacific Hotel.

So, when I was in Kampala, some political excitement was going on. Maybe I’ll talk about that in a later post. I watched the news, I got scared a bit, but ultimately I just ordered some chicken biryani (that reminded me more of West African food more than Indian or East African, aka greasier, but good!) from the hotel and had it sent up to my room for dinner. It was a good afternoon, evening and night for me. No bedbugs!!

Well guess what. The next morning, when I’m supposed to get on the 6:30 am bus, I slept through my alarm! Dang it. So I missed the good bus and now had to take some crappy bus. I ended up taking the Union Express bus from Kampala to Mbale. It was not a fun or comfortable ride.

So I missed my Post Bus. I wanted to take YY Bus which is supposed to be pretty nice but I haven’t tried it yet, (certain companies go to certain areas in the country). When I got to the bus park, the YY Mbale bus was not there yet. So I would have had to stand around for an unknown period for when it came. There was another bus I could take to Mbale, but it looked crappy. But at least I could sit down and potentially get to Mbale sooner too. Well I decided I’d take that, the Union Express. It was probably the crappiest one I’ve taken so far and the seats were for small, skinny people! I sat in the bus for over an hour while more passengers came to fill it up (which is typical). Also, the cost for this bus was 20k shillings. Post and YY were 15k.

The woman sitting next to me, who didn’t seem all that big, was pretty much on top of me. And she didn’t care about my personal space AT ALL. At this point, I’m not very happy considering:

Once we finally start leaving the bus park, would you believe that the bus seemed to stall two times before we were even out of the city center of Kampala? I was SO unhappy and frustrated. As we sat on the side of a hill, in the middle of the city, with no engine running and no information about what was going on, I thought that they couldn’t possibly give everyone’s money back and also, at this point, I have probably missed the YY and I would also have to pay for a boda to take me back to the bus park! I literally broke down in tears and sobbed into my hands for like 30 seconds. You have to realize that when all this is going on, it’s 90 degrees F and everything is dusty, so it’s extra miserable. I don’t know what made me snap out of it, maybe the thought of “all of my limbs work, my loved ones are alive, I still have plenty of money or something”. Finally the bus started running again and it continued to run all the way to Mbale. Praise the Lord!

As for the woman next to me: for the 6 hour drive, it could have been only a total of 5 min when I was not being touched by her or the child that she had with her. At one point the kids feet were practically wrapped around my calf. Oh well. Pick your battles. I tried to just be at peace with it.

I will never take Union Express again and I am SOOOOOOO glad to be back in Mbale!!!!

It sounds amazing. Good thing you have always been pretty ok with heat. Makes me want to go on a trip. Somewhere not hot. Love the pictures.