Posted November 30, 2015 by Laurie under Feelings, The Basics

I was going to write about the craziness of my last month in New England, my period of living out of boxes and bags and my car and friends’ houses and my long drive to Nebraska. But, who wants to hear about that? I don’t know, Africa will probably be more exciting. Bottom line: I worked my butt off for all this. I had some fun and some joy and some stress and I can’t wait for the pay off. Which comes in just a couple days!!

Here’s the cliff notes for my last two months: 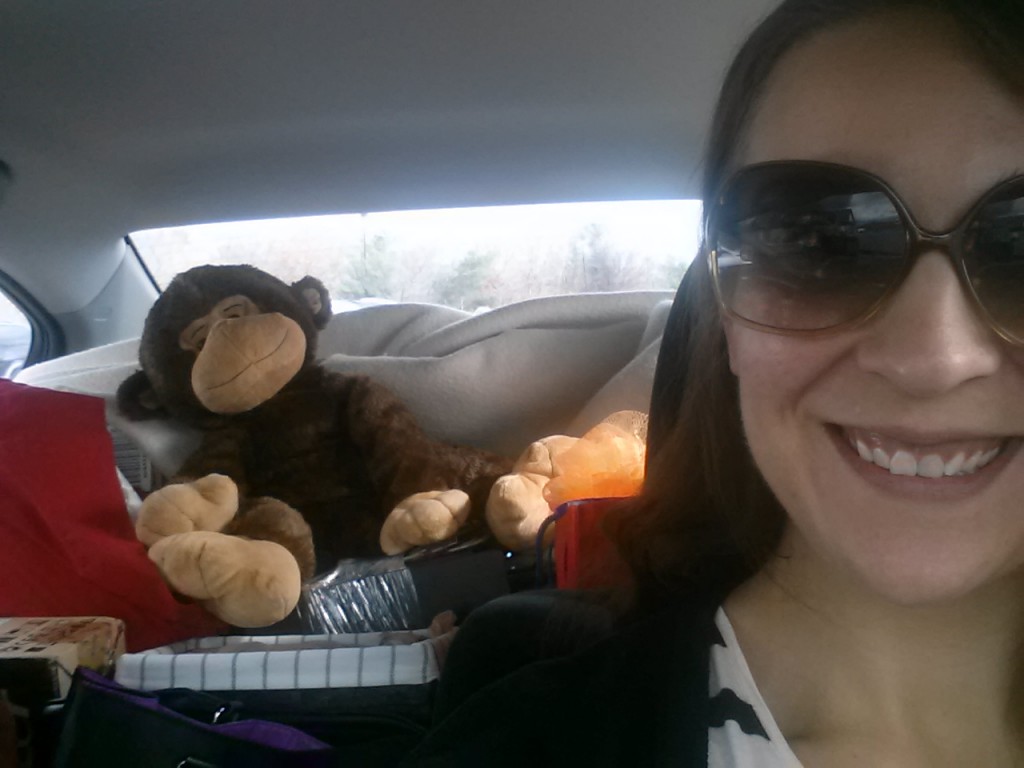 The crew. Laurie and Gerry B. packed in the Honda.

New England:
packing, downsizing, deciding, throwing stuff out, selling stuff, giving stuff away, ordering stuff, canceling things, signing up for things, trying to be social and enjoy my friends for my last bit in New England, running around like a chicken with my head cut off, creating new wrinkles in my forehead.

The Road Trip:
stops in Toronto, Chicago and Champaign, IL, a total of 1700 miles over the course of 6 days. Gray skies the whole time. Stayed with some great and lovely friends though! Thanks guys!

Nebraska:
Amazing time. Great Thanksgiving with family, my youngest grand-sib (niece, Nora, 9 months) who I never met until this trip loved me from the moment she saw me and she’s on the verge of walking unassisted. It’s all for me I’M SURE. Home has been very nice. I’ve been packing and prepping and storing and enjoying my family. Eating. The packing and prepping has been a bit stressful but hey, it’s gonna be a great pay off. Thanks to anyone and everyone who helped, from my sister who counted my tampons and my Dad who spent a legit 24 hour period helping me with my gear and everyone in between.

Here’s an analysis of the actual drive, for those who care about roads, and/or drivers:

Massachuetts:
not too bad. I love the jutting rock walls on the sides of the roads. Terrible drivers of course, but that was not a surprise to me since I’ve lived there for the past 8 years. 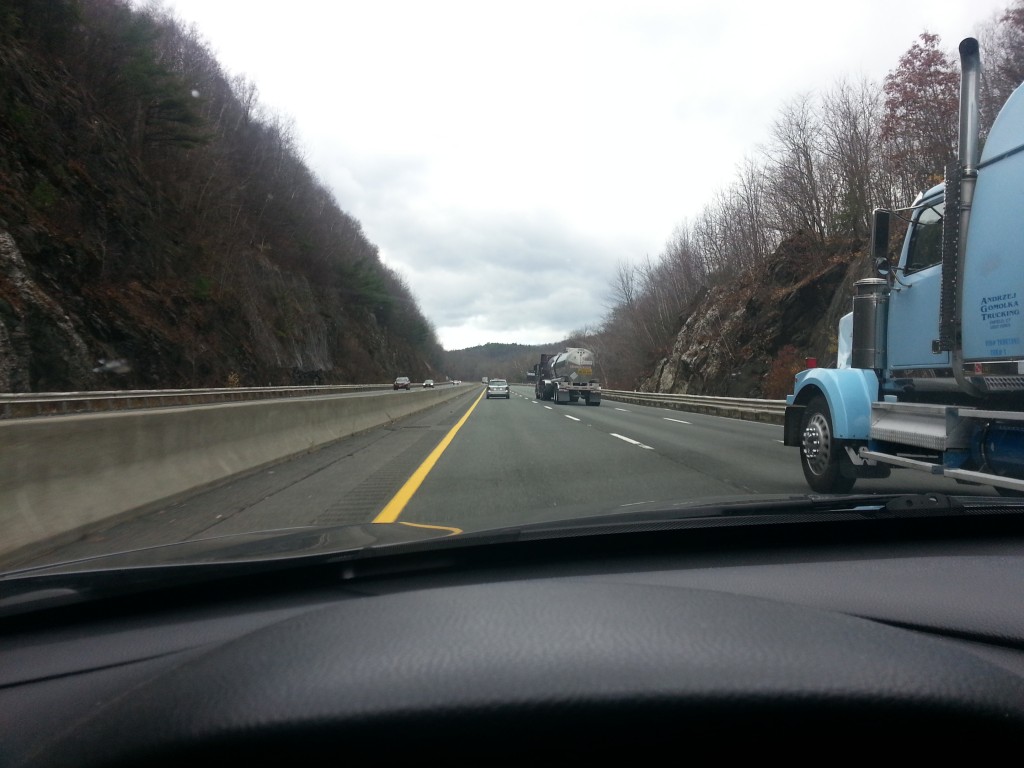 New York:
drivers were better than Mass. Over 50% of them got that the left lane is for passing.

Ontario:
pretty much dead roads. The way I like it! Of the approximately 4 hours of driving through Ontario (including only west of Toronto) I probably only encountered like 50 cars. Boring landscape though. No trees, no hills, no farms, no nothing.

Michigan:
the worst part of the drive. Constant traffic from Detroit to Chicago (about 3.5 hours actually in MI), had to be vigilant constantly. Stopped for a self-mutilating, feed-my-misery Oreo shake from Sonic.

Chicago:
not too bad. I was pleasantly surprised that during rush hour my GPS correctly estimated my time frame and that traffic flowed nicely. 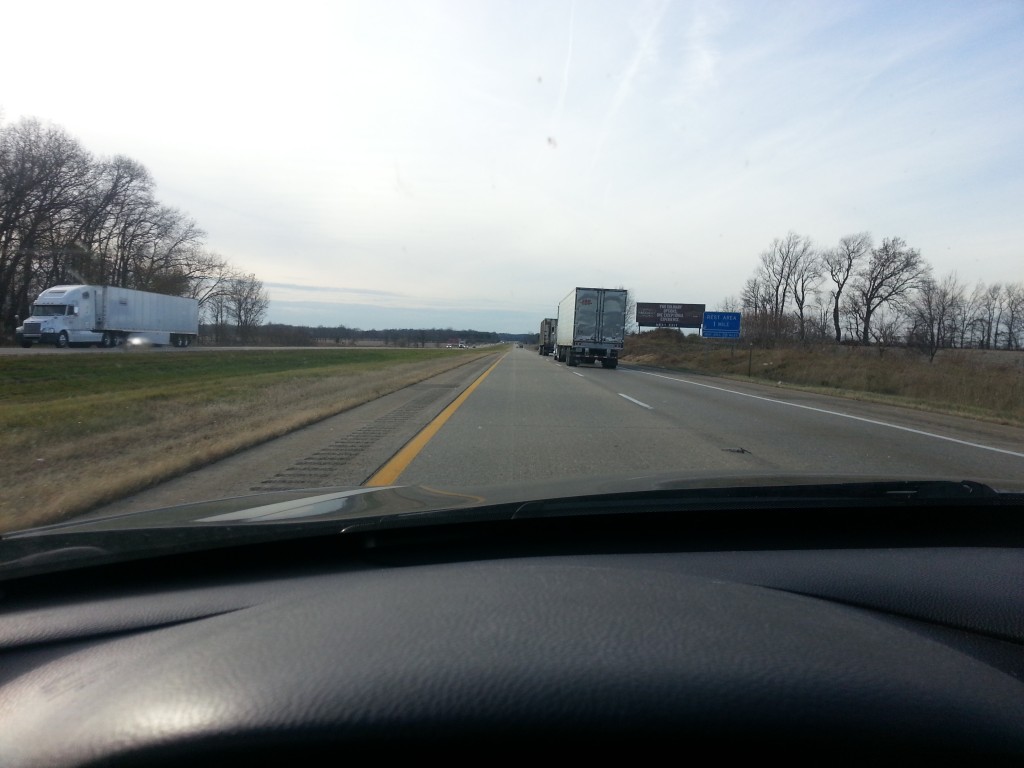 Illinois (not including Chicago):
lovely. The day I drove from Chi to Champ was only a 2.5 hour trip so it was smooth. Low traffic, (the kind I love), first instance where I came across 100% of drivers knowing that the left lane is for passing. Nice peaceful landscape, beautiful textured sky and lots of country music stations. 🙂

Missouri:
pretty lovely. Much like Illinois but less country radio and WAY more Christian stations. 100% of drivers knew that the left lane is for passing. Low traffic, I could just chill and admire the surroundings. Listened to some great Moth Radio Hour shows.

Iowa and Nebraska:
I won’t fully analyze because I’m more familiar with that territory. I got home and my biggest fear of getting killed in a car wreck and my second biggest fear of having my TV stolen did not occur. Yay!

Honestly, all the driving was pretty boring. I had been working on the last 1/3 of A Long Walk to Freedom by Nelson Mandela on CD, (which is a whopping 24 hours straight of his story…) It’s a good and important story but honestly it got to just be so brutally boring that I kinda gave up on it again. His extreme detail of every little monotonous detail was more than I could take and I will certainly apply those lessons to my blogging!

(If you are like “What does she mean that the left lane is for passing?”, it means that the left lane, when you are driving on a 4 lane road (2 lanes going in each direction), you should mostly be driving in the right lane, and when a car is going faster than you, he/she can pass you in the left lane. When the passer gets to a point where there is no one else to pass, then they should get back in the right lane. And if you are in the left lane and someone behind you flashes their headlights at you, they want you to get over so they can pass you because you are going too slow for them and are holding them (and traffic) up! And guess what, this is the law! 🙂 )

If any of that was boring, I apologize. They are going to get more interesting, I’m just sure of it! I leave for Africa in TWO days!!

Hi Laurie, so glad we got to see you before you head out on your journey to Africa. I admire your courage to follow your heart and your dreams. take care, travel safe……looking forward to hearing from you!